The result of Microsoft Office Specialist World Championship 2015, MOSWC, has been recently released in public and has made Cambodian people absolutely excited of Cambodian outstanding student.

In very young age, a student from university of Puthisastra achieved a good result which was engraved in Cambodia history as well as university, family, friends and the whole country. Kong Divin is known as an outstanding student and rewarded the first-place twice for both Microsoft Excel and Microsoft Power Point 2010. Surprisingly, he also left Cambodia with other two students to join MOSWC 2015 at United State (DALLAS, TEXAS, USA) on 8th August 2015.

The competition held on 09th August 2015. It’ very challenging that Divin, student of University of Puthisastra, had to compete with students come from 100 countries around the world in different subjects. As a result, Divin made Cambodian people surprised because of his talent and effort. A twenty-one-years-old student has been rewarded the second -place and has also got silver medal in Microsoft Office Specialist World Championship 2015. In addition, this outstanding student also got a certificate from Certiport, a company provides core testing services for workshops and all institutions around the world, and got 2500 dollars as well.

According to this very satisfactory result, it illustrates that even though Cambodia is a developing country, it also has human resources who are qualified to compete in international program. The development of high quality education in Cambodia has reached quality standard which is recognized globally.

Nowadays, Devin is a senior student who specializes in Data Management and Programming at University of Puthisastra. “Because of my hard working, friends, and help from lecturers who are the best consultants, especially the very inspired intrinsic motivation from my family, I could achieve all these results,” said Divin.

His family, team work, and management of University of Puthisastra went to Phnom Penh International Airport to congratulate and welcome his arrival on 14th August 2015 night. 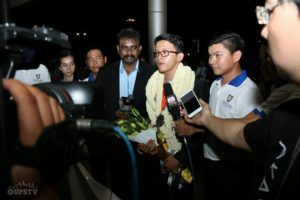 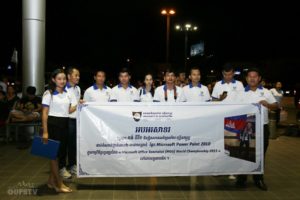 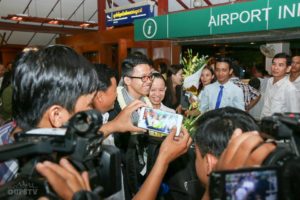 © All Rights reserved. Powered By UNIVERSITY OF PUTHISASTRA

Dr Steven Cohn AM is a specialist endodontist in Sydney. Steve has taught undergraduate and postgraduate endodontics at the University of Sydney and Westmead Hospital since 1979 and is the former Director of Postgraduate Endodontic Education at the University of Sydney. In 1998 Steve started the first microscope training courses for endodontists in Australia. Since 2009 Steve, Dr Rick Spencer and Ms Barbara Faulkner have conducted microscope courses for general practitioners. These courses have continued annually since 1998 and 2009 respectively. Steve also does hands on microscope training on an individual basis in dentist’s rooms on request.

Dr Cohn has also maintained a long interest in dental radiology. He was a consultant to the Dunvale and Rinn corporations and assisted with developing both the Rinn DS and DS Endo devices. He solely designed both the Snapex (1979) and TruView (2017) radiography systems, both specifically designed to be used with all endodontic and restorative procedures carried out under rubber dam. Steve regularly conducts “hands on” radiology workshops throughout Australia. Until recently Dr Cohn was a Federal ADA Media Advisor responsible for the development and delivery of educational content for the dental profession.

Geoffrey is a psychotherapist working in private practice in Sydney CBD.
Psychotherapy has been a natural evolution from working in dentistry in both specialist prosthodontic and hospital based practice. Geoffrey’s shared experiences with patients who present with complex medical and dental health problems and often with deep-seated emotional issues led him to undertake a training in psychotherapy.

Initially he delved into the world of psychology and counselling studying through ACAP and then followed a placement with ASCA – which then led to commencing a training with theUniversity of Sydney Complex Trauma Unit at Westmead Hospital graduating with a Masters of Science in Medicine in Psychotherapy.

Geoffrey is enrolled in continuing professional development activities and as part of his clinical psychotherapy practice has regular supervision.

Geoffrey practices both short and long term psychotherapy informed by the Conversational Model of Psychotherapy. He has a particular interest in individuals who present with: complex trauma and psychosomatic complaints and in patients who have complex life stories who may be suffering from anxiety, depression or post-traumatic stress disorder as a result of their life experiences.

“One day – the silent past arrives and becomes the invisible present and the story has to find a way to be told and heard.” Renn 2012

The joy of changing a person’s life by creating a beautiful, healthy smile is one of the rewards of being a dentist. Dentistry is a complex field as it is both challenging and rewarding.

Dentistry is the art and science of prevention and treatment of diseases of the oral cavity and associated with maxillofacial region. A dental surgeon provides professional support to the community to achieve and maintain optimum oral health.

MAHSA’s Faculty of Dentistry is committed to mentor our students in all levels of dental science. It offers 3 different programmes, Doctor of Dental Surgery, Diploma in Dental Technology and Certificate of Dental Surgery Assistant.

For the last 3 weeks Professor Kack-Kyun Kim has been visiting UP to teach oral microbiology to dental students. Professor Kim has recently retired from Seoul National University Faculty of Dentistry which is regarded as the top dental school in Korea. Cambodia sorely lacks expertise in this area and he gave a series of lectures on oral immunology and microbiology to year 2 dental students.

Professor Kim has been coming to Cambodia to teach almost every year since 2009. In recognition of Professor Kim’s significant contribution to dental education at UP, to Cambodia and to needy patients the President of UP Professor Ian Findlay has awarded Professor Kim with the title of Adjunct Professor of Oral Microbiology. UP continues to bring top international lecturers to UP to expose our students to World Leading expertise and experiences to help our students obtain a world class education